What is coir matting?

Coir, also known as "The golden fibre", is the fibrous exterior (mesocarp) forming the husk around the coconut shell, and is a natural protection for the seed (nut) within. The fibre has outstanding natural characteristics and properties, which make it an ideal choice for a multitude of applications, such as use in horticulture, aquarium filtration, ropes & cordage, sound barriers, marquee matting, flooring for pubs, shops, hotels, offices and BandB's and even marine use. 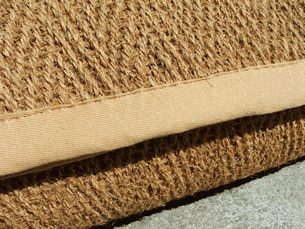 Coir from mature coconuts has less cellulose but a higher content of lignin than cotton or flax, which makes the fibre naturally stronger. The fibres have an elastic quality, which means it is supple enough to twist without breaking, and can therefore maintain its form and integrity when woven. These properties make it an ideal choice for covering large areas outside.

Coconuts used to make the coir products we supply to the United Kingdom are harvested from as early as 6 months for the production of white fibre coir, and left for 10-12 months for brown fibre. The husk is then removed from the hard shell of the coconut either manually or mechanically. The husks are soaked or "retted" in water for up to 10 months during which time microorganisms break down the plant tissues surrounding the fibres, causing them to swell and soften.

After various retting techniques, the husks are beaten either manually or mechanically to separate the fibres. The fibres are then washed, dried and cleaned to remove dirt, sand and the pith. Pith was originally seen as waste, but is now used as a peat moss substitute for horticultural production.

Traditional harvesting and retting of this kind yields the highest quality of (white) fibre for spinning and weaving. Retted fibres from green husks are the most suitable for dyeing and bleaching. For the production of more coarse brown yarns, shorter periods of retting may be applied. These find an increasing outlet in geo-textile applications.

After the coir fibre has been cleaned, it is straightened or "hackled" by using steel combs, and then spun into yarn using "ratts" (traditional spinning wheels). The spun yarns can now be bleached or dyed if necessary and woven into a myriad of shades, patterns and designs for floor coverings and other coir products.

There are extensive varieties/grades of coir yarn produced and each variety is associated with certain specific characteristics, used for industrial, agricultural and domestic applications. The standards set out for yarns dictates many factors, such as, length of fibres, colour, cleanliness, how the fibre was spun and the scorage (the length produced from 1Kg of coir).

Spun from long or medium stapled, natural bright golden coloured, well-cleaned coir extracted from retted husks, containing little or no pith or husk and varying percentages of sand; some what hairy; hard twisted-both the single ply and the two plies of yarn are more hard twisted than Anjengo A yarn thus Anjengo M being the hard twisted of all the varieties falling under hard twisted yarns; spun usually thicker than Anjengo A yarn in the scorages ranging from 10 to 15.

Spun from long or medium stapled coir extracted from retted husks and of colour ranging from slight reddish brown to bluish grey; containing very small amounts of pith, husk and also sand, appreciably hairy, fibres not teased properly; slightly dirtier in appearance than Anjengo A and Anjengo M; hard twisted-single strand is soft twisted but the two plies of the yarn are hard twisted but less hard and more irregular than either Anjengo A or Anjengo M yarns; scorages ranging from 11 to 18.

Yarn spun both by hand and wheel, mostly the latter, from bright coloured, fairly well cleaned coir extracted from retted husks, very soft textured appearance; containing small amounts of pith, husk and sand but no dirt; somewhat hairy soft and light in appearance; fairly even in thickness and twist fibres are not teased so well as in Anjengo A; soft twisted-both the single strand and the two plies are soft twisted; scorages ranging from 11 to 17.

Each warp thread is interlaced alternatively over and under by successive weft thread (vertically and horizontally). A basket weave version uses two or more strands of coir together in the same order. This enables the production of attractive patterns in both stripe and check (tile).

This type of weave produces a diagonal or herringbone effect. As the twill lines are formed on one side only of the fabric, this matting is non reversible. The use of this weave is principally for the manufacture of plain and solid coloured matting.

In this weave the twill lines are formed on both sides of the fabric and the matting is therefore more ornate in appearance and reversible. It is used for the production of superior quality matting in a variety of patterns such as reversible twill, reversible herringbone and reversible diamond.

It is important to us that the coir products we sell are sourced and produced ethically to the highest possible standards. In order to ensure this we visit the factories in Kerala, India and have seen the product manufacturing process first hand.

We supply products that we can ensure are produced in an eco-friendly and ethical way, which in turn supports the local people and community who make it. I personally travel to Kerala every year and have done so for the past 20 years.

All our coir products are produced from renewable resources, which helps support and facilitate the use of greener alternative products that are more sustainable and considerate to the environment.

The products we stock are manufactured in mills that offers good working conditions, the labour force treated with respect and the conditions and standards of the work environment are good.

Coir products are a staple of the economy in Kerala and production is highly regulated by the Coir Board of India, with each product graded according to quality of yarns used in its manufacture.

How to install coir matting

Fitting coir fibre matting on a roll is a really simple procedure.

That's about all you have to do when laying coir fibre matting outside. The coir rolls can also be joined together with a needle and jute, or coir string.

Our coconut coir matting is available in 9, 10 & 12 metre lengths, making coir matting for marquee flooring a great alternative to carpet. It is possible to easily cut the coir matting yourself using box cutters or a good pair of scissors, if you wish to trim for fitting, or reduce in length.

We generally sell the full rolls, but if you require shorter bespoke lengths please contact us. We can cut and re-hem mats to your desired size with a possible option of hemming colours.

✅ Can coir mats be washed?

Yes. Our coir mats can safely be pressure washed. This will not damage the mats or the coir yarn. Simply drape the mat over a fence or similar, jet wash and leave to dry.

Coir is the organic fiber obtained from the mesocarp, or husk, of the coconut. Our coir matting is made from 100% natural coconut coir fiber and has not been chemically treated in any way. Premium grade coir yarns are used for the production of all our coir matting.

✅ Where to buy coir matting?

Coir Store supply a large range of coconut coir matting and can deliver throughout the UK and Europe. We can also provide custom and bespoke mats made to order. If you require a large quantity or bespoke size please contact us.

Coir is naturally non-flammable. All our coir mats have been tested by UKAS to BS 4790:1987 and certification can be provided.

✅ Can coir mats be used outside?

Coir matting is an ideal outdoor flooring solution for gardens and lawn surfaces. A natural fiber product resilient to moisture and naturally flame retardant. See our range of products to suit your requirements, whether for a tent structure or to be used on your patio, balcony or BBQ area.

Secure shopping with Worldpay or PayPal

AMH Imports Ltd. use cookies and other technologies to collect user data from your device, so that: